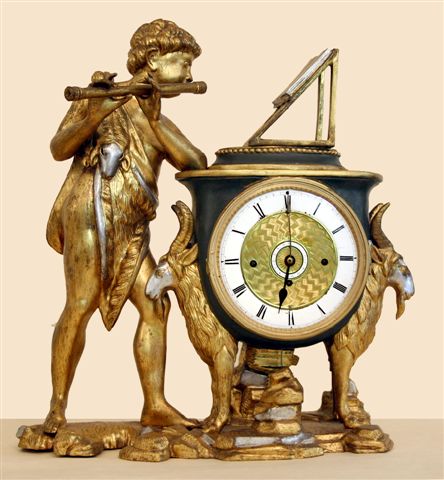 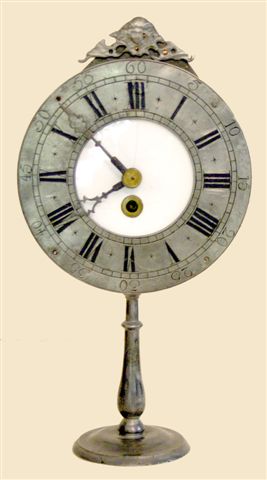 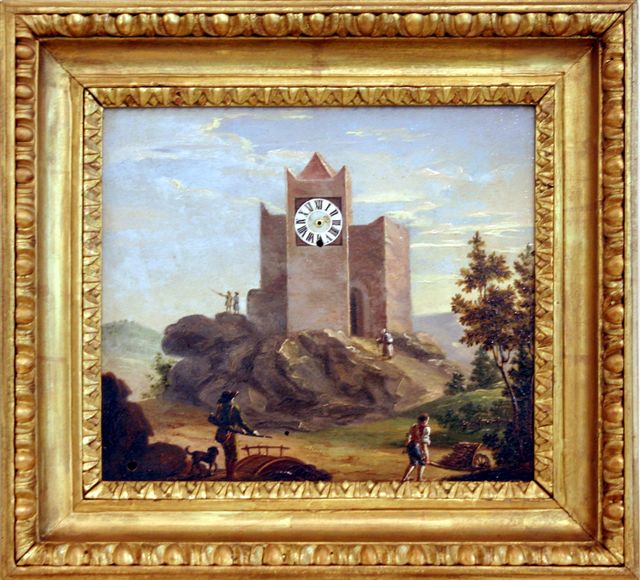 The picture clock (beginning of the XIX century), oil painting on sheet

The museum in Teplice has been working at its exposition of historical clock since 1996, having in mind the constant development of measuring-time methods, changes in clock-case designs according to the style of each epoch and the technical progress resulting in creating original mechanical devices from the XVIII till the beginning of the XX century. The majority of the exhibits are table clock, mostly alcove, pillar and cupboard clock, but there is also some figure, frame, skeleton,vase and alarm clock. Wall clock is represented by frame, picture and cartel clock. The producers of the exhibited clock mostly remain anonymous, and the only thing we know is that they worked at clock factories in Bohemia, Austria, Germany and France. Nevertheless on some of the clock-faces the visitors can read the names of the clockmakers. We should mention, of course, Ludwig Shchneider form Teplice, whose two devices are dated the 50´s of the XIX century. Then there are works by Ingatz Fisher from Duchcov (the middle of the XVIII century) and Josef Fraenzl (the beginning of the XIX century). As for the foreign clockmakers, the name of George Geiger form Vienne is surely worth of mention. Designers of clock-cases mostly remain anonymous, although creation of engraved and carved appliques, clock faces, hands, lentils and pendulums requires a high level of experience in watch and clock making and means dealing with different kinds of metal, alabaster and wood. Already in the Middle Ages clock masters united in different communities and companies. Up to the beginning of the XVIII century they had belonged to the locksmiths´ guild, but in 1708 left it ( by Josef II´s decree) which made it possible for them to form the Prague watch-and-clock-makers´ guild. Misters of this guild were divided into wholesale and retail clockmakers. Besides them there were so-called „country clock-makers“ coming from different parts of the Czech territory, mostly from North Bohemia, for example Česká Lípa, Děčín, Josefov, Kadaň, Karlovy Vary, Litoměřice and Most. The oldest mention of the Teplice clockmaker Hans Hansov, called „Klein Uhrmacher“, refers to 1769. Judging by his nickname we can suppose that he specialized in making watches or clock. Another famous clockmaker of that time was Hans Nikodemus who got the title of Master in 1765. We got to know his name thanks to the entry in the register in 1799 when his son was born. At the end of the XVIII century a wooden hand- painted clock coming from the roundabouts of Schwarzwald becomes popular in our country. This type of clock infuenced our clock masters for several decades. From the regional point of view the XIX century is a very interesing period in the history of clock manufacturing, when the guilds were closed down by the trade regulations in 1859, and their production became the prerogative of trade companies, manufactures and, later, factories. In 1887 in Chomutov in the building of the former water- mill the Germans Schlender and Kienzle founded a small clock factory which expanded very quickly and before the World War I became one of the biggest in the monarchy. The majority of the products consisted of consumer clock, that is, alarm clock, wall and table clock ( mostly „Schwarzwald clock), pendulum clock and cuckoo clock. From 1927 under a new name (J. Kienzle, Clockworks) this factory functioned till 1948 as a branch of the plant in Schwenningen on Nechar. After the partial confiscation of property it was included into the national enterprise Chronotech.