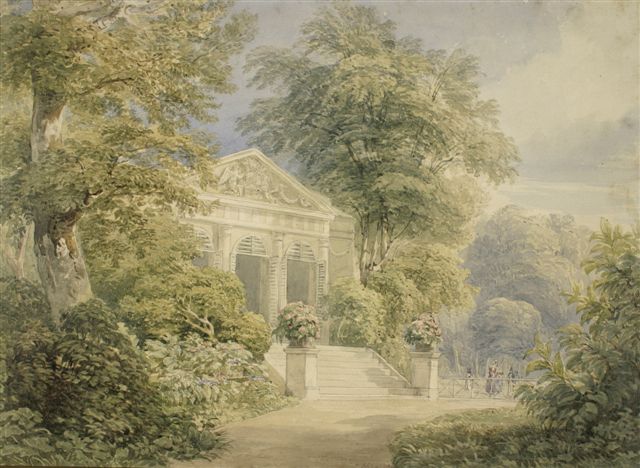 An amateur drawer, the chateau theatre, watercolour, about 1850 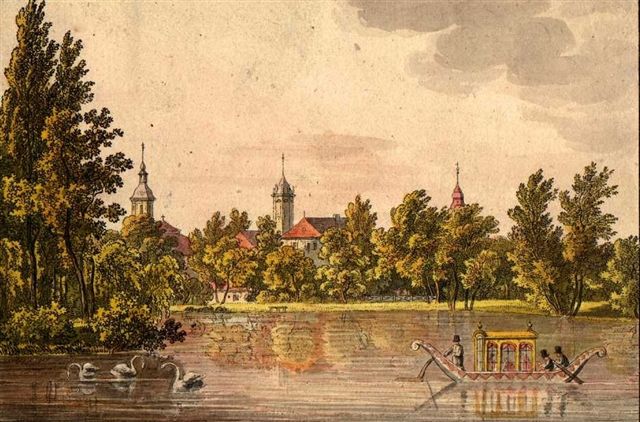 The view of the chateau small pond 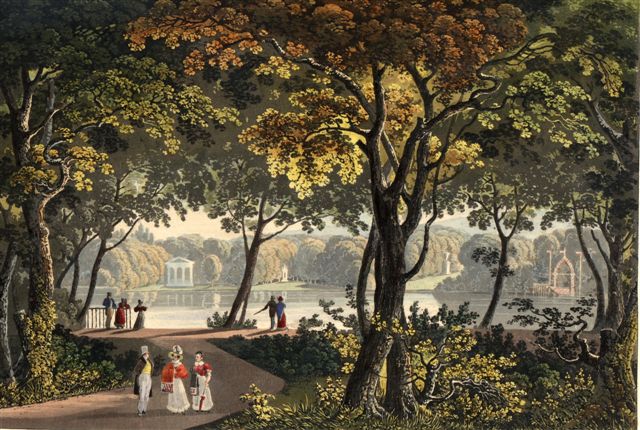 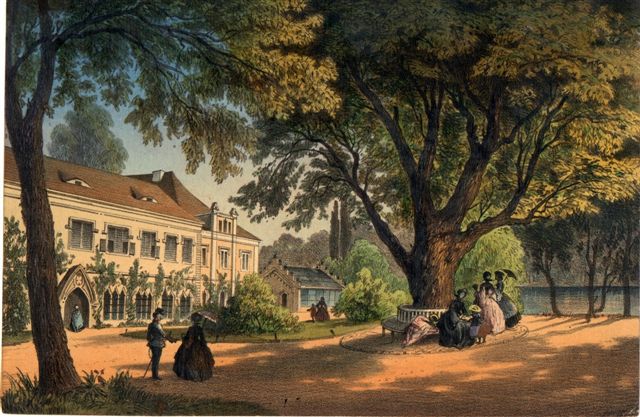 The view of the neo-Gothic face-lift of the eastern wing of the chateau, coloured lithography, published by Ed. Muller in Dresden, about 1860

„One should go to Teplice to see what is the wisest in birth and death. Prince Clary had a garden forcingly magnificient, appreciated by spa guests during hundreds of years. He declared war to stones, walls, stairs and terraces. And even if he had great respect to the old trees, he condemned them to death to get rid of straight lines or mixed them with irregular flowerbeds. He skilfully separated the two big expances of water, and one of them became a real lake, the other – has a Moresque pavilion and a charming island.“

By these several sentences Charles De Ligne in his book about big gardens in Europe described the basic changes, which after the year 1787 placed the small Teplice garden among the biggest and the most popular parks.

The first written mention about the look and the lay-out of the garden is made by the German doctor Caspar Schwenkfeldt in his description of Teplice spas, first published in 1607. The Czech writer and historian Bohuslav Balbin in his book „History of Bohemia“ appreciated not only the aesthetic look, but the variety of plants, bushes and trees, by which the utility and ornamental parts were planted. The fame of the garden became even greater with the appearance of plenty of evergreen exotic species at the beginning of the XVIII century. The Clary-Aldringens adapted the look of the garden to the contemprary aesthetic requirements – from the solid conception to a more free country-like view. In the garden they placed a labyrinth, a pheasantry, an orangery, a glass-house with fig-trees, and a yard, typical for country life. In the ponds one could hunt wild ducks, go by small boats or gondolas. In 1732 the silhouette of the garden was enriched by the Garden House and the Ball Room, in which the spa guests danced, played cards or other board games. Between 1787-1810 Jan N. Clary-Aldringen, according to the plan of Johann August Giessel, an architect from Dresden, made the grand-scale building and urban changes, by which he joined the chateau, the garden and the town build-up area in one unified classicist style. The whole conception was unique in Bohemia at that time. In the garden he had the farm buildings removed, a part of the upper pond dried, and the territory between the two expances of water smartened. The southern facade of the chateau with the arcades was opened to the garden, connected with it there was a newly-built garden theatre, finishing with a salon and a facade in the French classicist style. During the renovation of the facade of the chateau church, the western wing and some garden buildings ,besides the classicist elements, (rare at that time) the Gothic Revival motives were used. In 1813 the Russian army „invaded“ the garden, but the damages were soon cleared away, and the changes in the look of the garden and the renovation of the chateau continued. In 1841 in the upper pond an artificial island appeared, and the boat quay was reconstructed, which after the year 1870 got a historical similarity to a wooden construction with carved swans. For the public the garden was opened in 1848, the open- air swimming pool – at the beginning of 1930´s. The pool was placed in the southern part of the garden, it was in operation till 1990. The whole territory of the garden was made smaller after 1970, due to the construction of the road bridge in its western part.