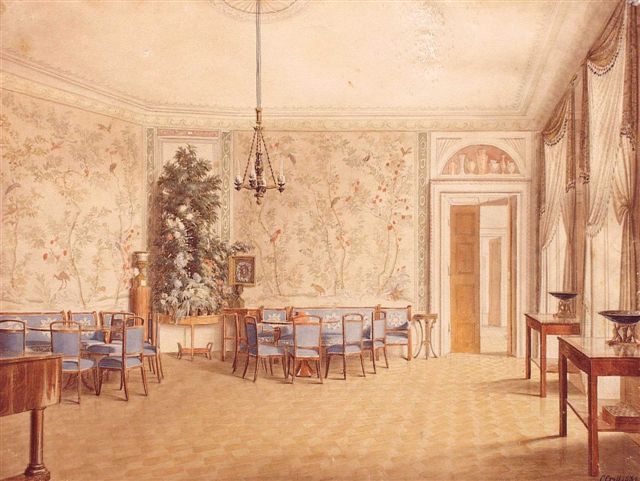 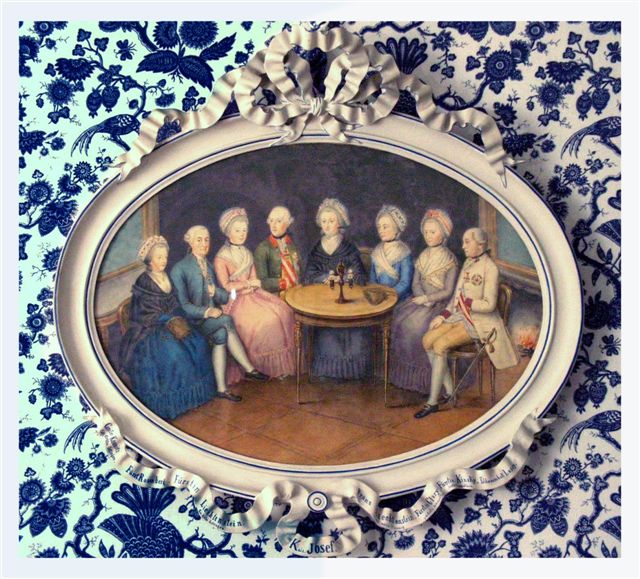 Josep II with a group of noblemen. Watercolour, an amateur artist of the XVIII century 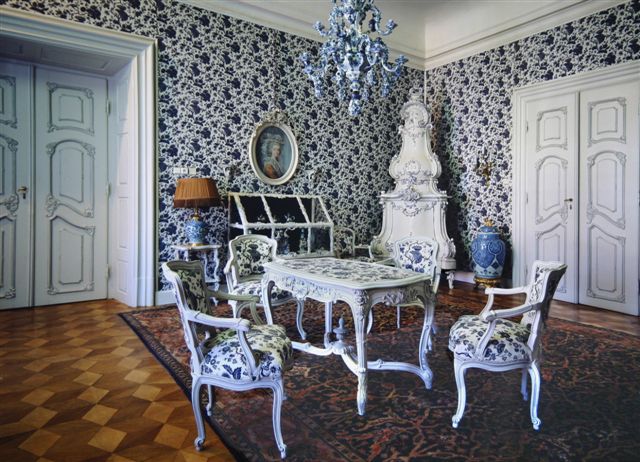 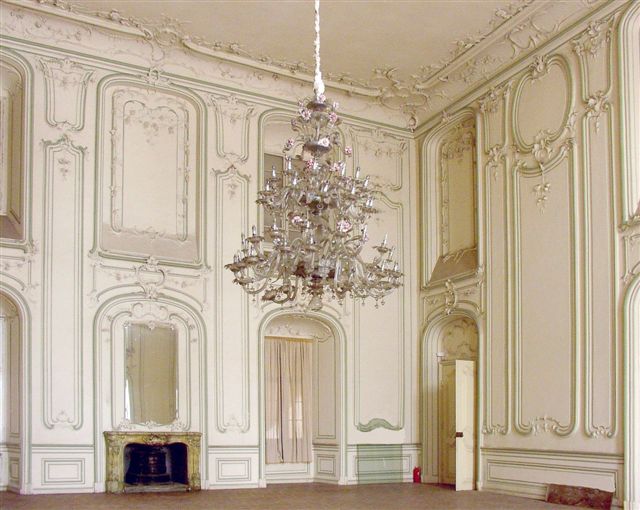 In 1947 the Teplice museum was given the right to use the large premises of the chateau bulidnig which in 1634-1945 had belonged to the family of Clary-Aldringens. The property of the chateau after the World War II happened to be distributed between many cultural institutions of the Czech republic, part of it was returned to Teplice in 1981-1983. The museum had preserved three original salons and completed the rest of them in 1994. These rooms together with the "Rococo Hall" complete the presentation of the cultural history in the Teplice region and the art collection of its museum. They are placed in the chateau main wing, which was bulit in the XVI century, reconstructed first in 1751 and then in 1797. There you can see the original stove and the floor dated the first hafl of the XIX century.The most part of the wood- work was installed at the end of the XIX century during the adaptation of the chateu. The salons refer to different historical events and personalities. The original chateau collection of paintings refers to the events forming the history not only of the noble family and the Teplice region, but of the whole Europe.

The salon remembers the visit of famous musicians and composers at theTeplice chateau, for example the concert of Fryderyk Chopin on the 23rd of August 1829, when he improvised on the musical topics of the famous composers, or the concert of Franze Liszt on the 19th of August 1853. The room is decorated by the late classicist woodwork with four ornamental paintings of the four seasons of the year and a Venice chandelier produced at M.O. Testolini shopwork.

The historically furnished room (1850-1900) is equipped in late rococo style and painted in blue-white colours of Meissen, earlier it was referred to as the Meissen salon. The neo-rococo stove and the nicely-shaped chandelier were produced in Dresden. The furnishings of the room are supplemented by the replicas of the show cases in French rococo style of the second half of the XVIII century. The portraits also remind us of the period after the year 1750. The portrait of Josef Clary-Aldringen (1728-1801) was painted by an artist from the Central Europe. The princess Clary belonged to the close circle of Josef II´ s friends, who are depicted in the watercolour, painted by an amateur artist of the XIII century.

The big hall became the dominating space of the chateau main wing after the year 1751. Six rooms with a view of the Chateau Square joined it. The original rococo stucco decoration of the hall was reconstructed first at the end of the XVIII and then at the end of the XIX century. At that time there was also a chandelier produced in the workshop of Giovanni Ongar. Originally the hall was furnished, and on its walls there were big portraits. In this hall many literary and musical evenings took place. A lot of famous spa visitors participated in them. In 2002 the European Union supported the project of the Regional Museum in Teplice and with the help of the programme Phare CBC financed the reconstruction of the Rococo hall. It cost nearly 1,5 million crowns. Nowadays the hall is used for public festivals and concerts.