The History of the Teplice Chateau

The History of the Teplice Chateau 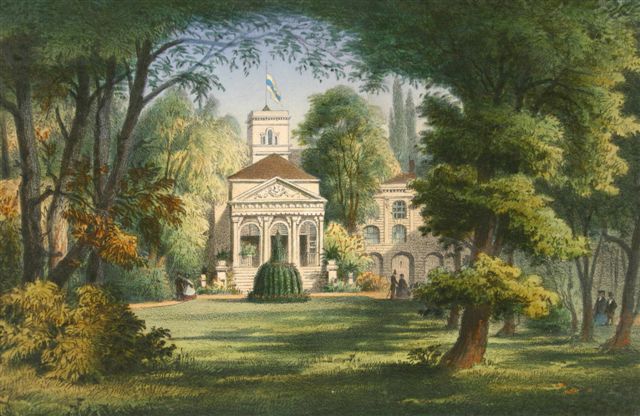 The classicist frontage of the chateau salon near the chateau theatre in the middle of the XIX century, colouring litography 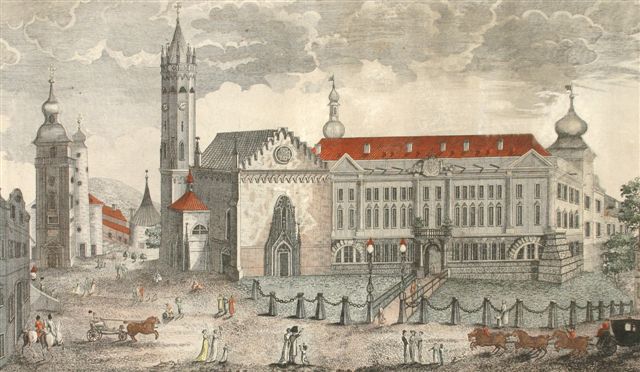 Peter Franza, the Chateau square at the beginning of the XIX century, colouring engraving 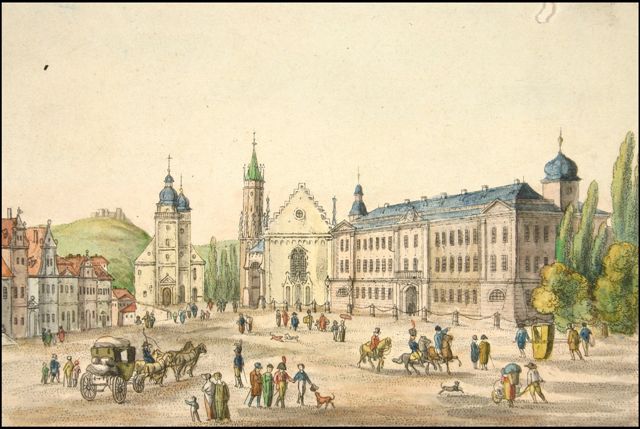 The Chateau square around 1810, colouring etching 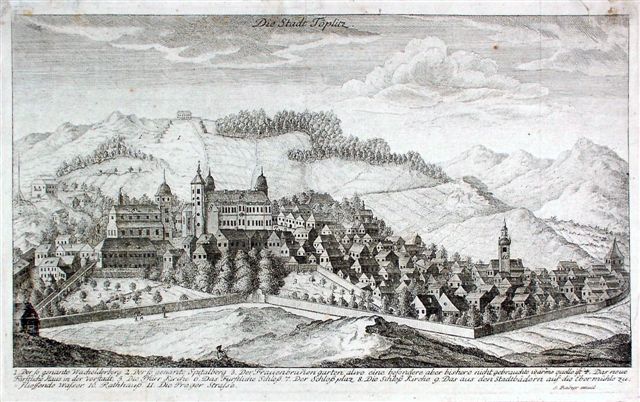 J. Balzer, the view of Teplice with the chateau, around 1780

The building styles, starting with the Romanesque and finishing with the Historicism of the XIX century, greatly infuenced the architecture of the chateau area. Its building started in the second half of the XII century, when Queen Judith „near hot water“ set up the Benedictine Order convent with a church called St. John the Baptist. Near the convent there was a settlement and from it, or from somewhere near, the town of Teplice developed later (the end of the XIII century or the beginning of the XIV century). During the Hussite wars the convent was badly damaged, the district commissioner Jakoubek from Vřesovice became its owner, and the nuns left the convent in the 30´s of the XV century. Thirty years later the king Jiri from Podebrady assigned the convent estate to his wife Johana from Rožmital, and it was rebuilt into a fortified country seat, referred to, in some written sources, as „castle“ or „fortress“. After Queen Johana´s death the owners of the chateau often changed, and the larger building activities started only at the time of Volf from Vřesovice, the educated nobleman of the Czech kingdom, the commissiorer of the Prague Castle and the President of the Czech Chamber, who owned Teplice in 1543 – 1569. Since Gothic-Renaissance period some parts of the chateau have been preserved, that is, the ground floor of the main building with the passage and the stone portal, the lower part of the western tower and the chateau church, where Volf was buried in 1569. The family of Vrchynsky owned Teplice since 1585. During the time of their reign the construction of the main building was finished and supplemented by the archways. This building was called „the new chateau“, while the rebuilt eastern, southern and western parts of the former convent, forming the inner courtyard, were named, according to some written sources, „the old chateau“. The outside corner of the new chateau was strengthened by the towers with cupolas. At that time the western wing of the main building, facing the park, had already been built. In 1600 on the eastern end of the chateau area a „lusthaus“, called the Kolostuj steeples, was erected. After the death of the last Czech owner of Teplice Vilem Vchynsky, who was killed in Cheb in 1634 together with Albrecht from Valdštejn, the rule got into the hands of the Emperor´s marshal Jan Aldringen. The Baroque reconstruction of the chateau started at the time of his successors Clary-Aldringens in the second half of the XVII century. During this reconstruction the old western wing was pulled down and replaced by the New building, on the ground floor of which there was a horse stable. At the beginning of the XVIII century, in the close neighbourhood of the chateau, the master builder Christian Lagler built the Garden House (today´s casino) and, probably, the Baroque aviary with the garden staircase near the Kolostuj steeples. The fundamental reconstruction of the chateau in the late Baroque style started in 1751, having essentially changed the interiors of the first and the second floors of the main building. The next phase of the reconstruction, begun in 1787, had mainly a classicist character. In 1787-1789 a theatre and a garden salon with a decorative staircase, leading to the park, were annexed to the right western wing of the New building. The adjustments, made at the turn of the XVIII and the XIX centuries, gave the park frontage of the main building a monumental look by strenghtening the arcades on the ground floor, there also appeared mighty plinths with high pilasters of Tuscan Order. The front surface was decorated by bosses. The new facade, facing the square, gained an austere classicist look. The chateau church and both the southern and eastern buildings of the old chateau were adjusted to the style of romanticizing Gothics. In 1817 the Baroque cupola of the western tower was also rebuilt in the classicist tyle, and the eastern tower was lowered to its present height. The historical adjustments, begun at the end of the XIX century, affected the interiors of the first floor with the help of the arcades, broken through to the neighbouring rooms, and also the inner yard, where a terrace and a supporting wall with a balustrade were established. In 1929-1931 the chateau theatre was rebuilt into habitable rooms and a library. Inside the chateau there are valuable interiors, still preserved, as, for instance, the hall with the painted coffered ceiling, the Rococo hall with a rich stuke decoration made by French craftsmen in 1772, or the rooms furnished in the Rococo, Empire or Biedermeier style. These rooms used to witness private visits and political meetings of European sovereigns and the vivid social life enriched by Charles de Ligne, Giacomo Casanova, J. W. Goethe, Frederyk Chopin, Franz Liszt and many others. The chateau was the Clary-Aldringens´ seat until May 1945, then its last private owner JuDr.Alfons Clary-Aldringen and the members of his family due to various perepitias settled in Germany, Italy and in the USA. The chateau building was given to the Teplice museum in 1947.